Rovers kicked off their campaign in bright and humid conditions. The visitors started strongly keeping Rovers penned in their own half in the early exchanges. The visitors gained several corners with the main threats to Rovers defence coming mainly from the flanks. However the early storm was weathered and against the run of play a penalty was awarded to Stanway for a push in the penalty area on Tom Holdstock.  Jordan Blackwell stepped up and beat the keeper with a shot just inside the right hand post. Play continued in much the same pattern although the visitors attacks never really had the home side in danger. This all changed ten minutes before the break when a needless free kick was given away; the resultant cross allowed an unmarked Robinson to glance a good header past the onlooking Wheeler. The second half started much as the first although Rovers came more into the game and gave themselves two glorious chances both of which failed to trouble the keeper. At the other end the visitors attack never threatened the defence and what did get by them was comfortably dealt with by Wheeler. Midway through the half Shaw, Maybanks and Wood were introduced, the result being Rovers domination of the remainder of the half. This was rewarded in the 83rd minute when Shaw received the ball and bustled his way through a packed defence and blasted it past the keeper, much to the delight of the home supporters. Newmarket retaliated but all too late as Rovers ran out winners.  Supporters went home happy and encouraged by the commitment of the players.

Man of the Match – Tom Holdstock 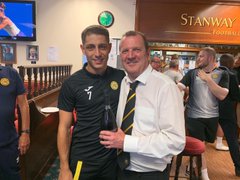