Records show that the current Stanway Rovers FC reformed on Tuesday 10th July 1956.  However local newspaper cuttings tell us that there was a football club operating in the Stanway area in the early 1900’s.
The Club minute book shows that the first member meeting was held at St. Albright’s Hall, Stanway, the meeting being chaired by the late Jack Poole of the Essex County FA. In these early years the Rovers played their matches on the King George 5th playing field Clairmont Road, Lexden, which is only a short footballs kick from their current Hawthorns home. They
were accepted into Division 2 of the Colchester & East Essex League, and by 1960 they had gained promotions to the Premier Division. A Reserve Team was formed starting in Division Five.

Dave Jones is the current chairman having taken over the club in 2018.

The records then show that in 1961 the Club moved its home to Stanway Secondary School, again just around the corner from the Hawthorns. The Headmaster at that time Mr Gardham became Club President, an office that all Headmasters at the School held over the 18 years or so that the Club stayed there. The facilities at the School were second to none, the Club
having use of the gymnasium/ sports hall and the Schools soccer pitches from 1964 onwards.

In 1967/68 the Rovers won the Colchester & East Essex League, and the 1973-74 season saw Stanway Rovers enjoying their most successful season to date when they won the League title, all the other competitions trophies, defeated a League Representative side, and went on to the quarter finals of the Essex Junior Cup.
In 1974-75, the Club reached the Final of the Essex Junior Cup losing 1-0 to Takely, the match being played at Grays Athletic FC.

1975-76 season saw the first team join the Essex & Suffolk Border League playing in Division 1. At the start of the 1978-79 season, the Rovers were placed into the new Division Two of the Border League finishing in 3rd position and gaining promotion to Division One.
The Reserve Team had at this time also joined the Border League.
In 1979, the ‘home’ of the Rovers was subject of discussion with the Local Authority, who agreed to lease the Club 4.6 acres of land in New Farm Road for a 99 year period. Stanway Rovers finally had its own home – and the first wooden Clubhouse was opened on 18th November 1982, carrying the name of the Hawthorns after the shrub which grew prolifically in the area at the time.
Pushing on, in 1989-90 and 1990-91 the Club reached the Final of the Essex Intermediate Cup two years running, unfortunately losing both games 3-1. However, in the following 1991-92 season Stanway finished runners up in the Premier Division and their application to join the then Jewson League was duly accepted. Having been granted Senior Status the Clubs first game in the Jewson League Division 1 was a 2-2 draw at Swaffham Town on 22nd
August 1992.

Despite failing to receive a grant from the National Lottery, the Club finished the rebuildingof its current Headquarters at the Hawthorns – the Members Bar, Committee/Board Room and the Hawthorn suite of function rooms being officially opened on 28th March 2001 by Colchester MP Bob Russell.

In November 2003 Jim McIntyre was appointed Manager with Ian ‘Dan’ Daly joining him asassistant a few months later – they set about assembling a good squad of players and after 14 seasons in Division One, in 2006 the Rovers were crowned Division 1 Champions and were also finalists in the First Division Knockout Cup.
2007/08 saw the first season under the joint management of young managers Rob Bate and Paul Symes which proved to be another successful campaign, during which Rovers beat Colchester United 2-1 at the old Layer Road stadium in the 3rd round of the Essex Senior Cup, reached a Club best 5th round in the F.A.Vase, and a very respectable 7th position finish
in the League.

2008/09 saw the Club further consolidate itself in the Ridgeons Premier Division with a superb 9th position finish, along the way being the only Ridgeons team to beat run away champions Lowestoft at the Crown Meadow, F.A Vase 4th round, and winning the League Cup 4-2 on penalties against Leiston FC.
Following the departure of Bate and Symes at the end of the season, 2009/10 saw the Rovers under the new Management of Steve Downey, who played for the Rovers for 3 seasons from 1996.

In January 2011 Rovers parted company with Downey and immediately appointed ‘old boy’ Wayne Bond as caretaker manager to the end of the season. The Rovers moved quickly to secure the services of vastly experienced Steve Pitt from FC Clacton, and teamed him together with prolific ex-Rover striker Ray Turner.

In his first season in charge Pitt took the Rovers to their best ever finish in Step 5, with a 5th place finish in the Premier League, and in the last game of the campaign winning the League Challenge Cup 1-2 against Norwich United FC at Diss Town FC. The history books will show that Stanway Rovers FC were the last Club to win Ridgeons League honours, as we move into the Thurlow Nunn Eastern Counties League era.
After a couple of turbulent seasons which saw the departure of Pitt and his successor Barry Lakin after a short tenure, Angelo Harrop took over the side at the wrong end of the table in October 2013. Harrop successfully guided the team to safety and an eventual 13th place finish. Harrop then led Rovers to a 3rd place finish in the 2014-15 Thurlow Nunn League as well as reaching the 5th round of the FA Vase. Rovers finished the 2015-16 season again in 3rd place under Harrop but with a record points tally of 90 points, staying unbeaten in the league from October to the season end. The 2016-17 season started with dropped points in August and Rovers solidified their top 5 positon moving into Christmas. Harrop however left the club in December 2016 to be replaced by ex-Colchester United captain Karl Duguid. The season petered out with Rovers clinging on to 6th position on the final day of the season. As Rovers moved into the new season Duguid reverted to Assistant Manager where he worked alongside the ex-Colchester and Charlton midfielder Kemi Izzet.

In the 2017-18 season major changes took place with the departure of the Chairman and the Business Manager plus the management team of Izzet and Duguid. In addition, in their wisdom, the Football Association decided to re-organise the leagues and moved the club to the Essex Senior League. A new management team of Lee Fisher and Andy Jones took charge of the football team but following the appointment of a new Chairman, in the form of one Dave Jones, Angelo Harrop returned to the club as Director of Football with the plan to reintegrate the Stanway Rovers Youth section back into the club as he and Jones appointed a new manager; the vastly experienced Terry Spillane 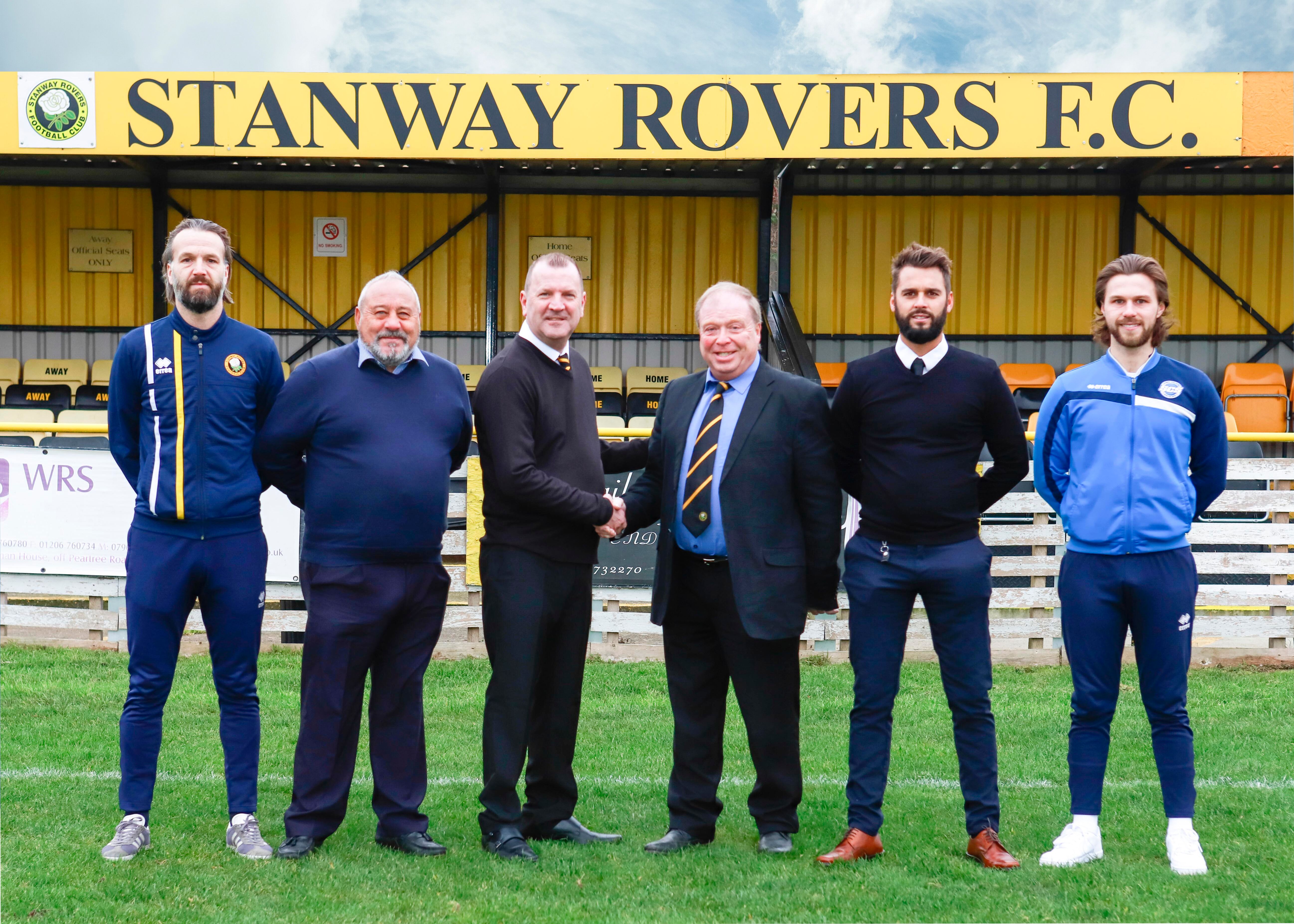