The draw for the second round of the League Challenge Cup has taken place.

Should Rovers overcome Brightlingsea Regent Reserves in the First Round on October 15th, we will then face May & Baker at home in the second round.

May & Baker currently sit 8th in the First Division North table with four wins from their opening seven matches.

The tie is provisionally scheduled for Tuesday 22nd October.

Despite an injury crisis, Rovers continued their fine home form with a 2-0 home victory at fortress Hawthorns over Swaffham Town on Saturday.  With four of the Under 18’s side in the match day squad, Rovers ran out 2-0 winners thanks to goals from Milo Grimes & Jack Baker.

Under 18’s goalkeeper Luke Skinner (pictured below collecting his Man of the Match award from Club Vice Chairman and Model Kevin Mather) made his 4th start of the season and excelled throughout.

The Rovers are at home again next Saturday 5 October, to 5th place Godmanchester Rovers.

Our first team return to league action at The Hawthorns on 28 September where Swaffham Town will be our visitors.

Kick off will be at 3pm with admission priced at just 6 pounds for adults and 4 pounds for concessions.

Please come along to support the boys.

The bar will be open from 12pm where the ever charming and sun tanned Bar Manager, Keven will be eager to serve you from our competitively priced range of alcoholic and soft drinks.

Sheffield United vs Liverpool will be shown on the big screen in the Members Bar before the game with Dover Athletic versus Halifax Town being shown after the game.

The usual poor quality banter will also be available in the Members Bar. 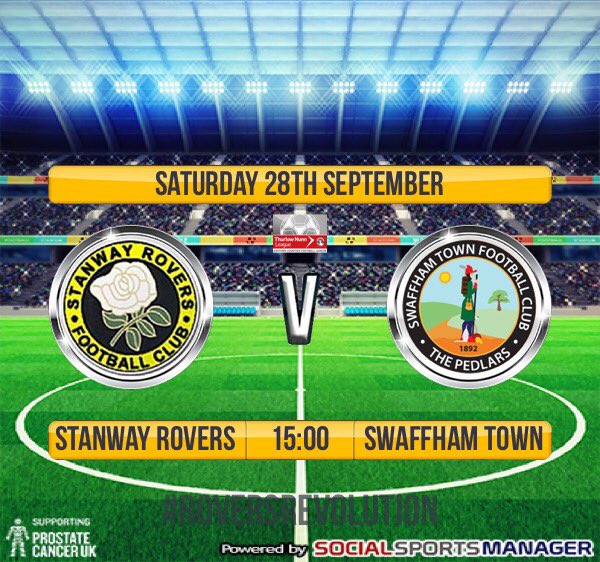 Following our 2-1 victory over West Essex in the 2nd round of the Essex Senior Cup, Rovers were drawn at home to Chlemsford City in the 3rd round.  The date of the fixture will be confirmed in due course. 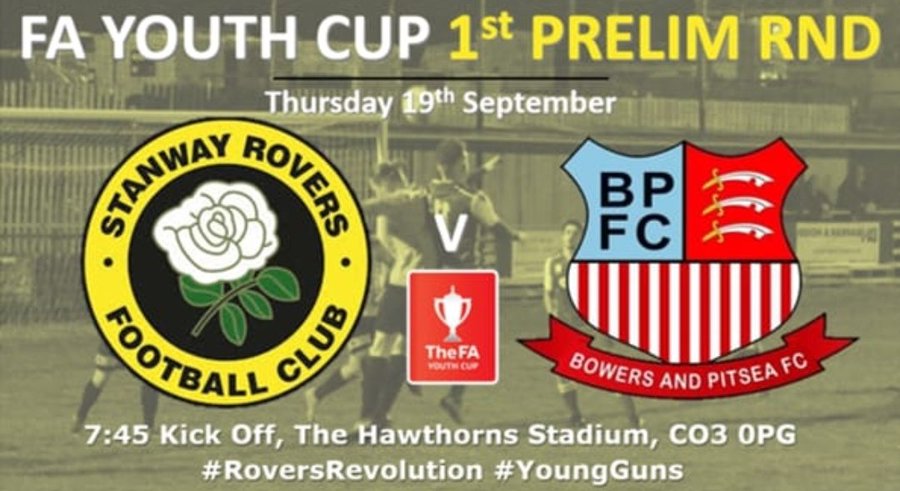 Following our outstanding 7-1 victory over Wodson Park on Saturday, the draw for the 1st round proper of the FA Vase took place at Wembley Stadium yesterday (16/9).

Rovers have been drawn away to Lopes Tavares of the Thurlow Nunn First Division South.

Lopes Tavares currently sit 3rd in the table having won all four of their league matches to date.  They have progressed to this stage of the competition following a 2-0 victory against Harwich & Parkeston, and a 3-1 victory against Catholic United in previous rounds.

Pictured below is Man of Match Jamie Shaw picking up his award after Saturday’s 7-1 victory from our main sponsor T & S Wild Plumbing & Heating.

STANWAY Rovers joint-assistant boss Craig Hughes hopes the club’s early-season success can help place it at the heart of the community and lure more supporters to The Hawthorns.

Danny Slatter’s men have made a stunning start to the new campaign, winning four of their opening six Thurlow Nunn League matches.

They are through to the first-round proper of the FA Vase, following Saturday’s 7-1 victory against Wodson Park.

And for good measure, they are also still in the Essex Senior Cup and looking forward to a first-round tie at home to neighbours FC Clacton tonight (kick-off 7.45pm). Hughes admits it’s been a dream start but insists no-one is resting on their laurels.

“We’ve given an excellent account of ourselves so far,” said the former Colchester United youngster.

“We couldn’t have asked for more but now it’s about kicking on and going again, given the high standards and expectations we’ve got.

“We’ll never rest on our laurels and know we’re capable of more.

“We’ve brought lads in who can help us be successful at this level and they know the way we want to play.

“They also know what we’re about as a club, in terms of the club’s importance in the area.”

Hughes is a firm believer that his club have a big role to play in the Stanway community.

In addition to their success on the pitch, Rovers are launching their own football academy in 2020.

“We want to get the community involved again, as they were when we were here before,” said Hughes.

“It’s a big community club and if you look at the facilities here, they’re great.

“We’re trying to do things as professionally as we can.

“We want to do things the right way and give these boys the very best opportunity to be successful on the pitch.”

Hughes is focusing heavily on his managerial responsibilities at the moment.

He is still a key player at the club but on the sidelines due to an anterior cruciate ligament (ACL) injury. He is due to have an exploratory operation on October 24.

If the ACL doesn’t need replacing, he could be back by Christmas.

If not, he will spend the rest of this season rehabilitating before making his comeback in 2020.

“At the moment, I’m doing what I need to do to give myself the best chance of a full recovery,” said Hughes.

“Josh Congdon, from Reflex-18 Physiotherapy Clinic, has been a great help during my time in rehab and also around the club.

“It was really helpful to speak to someone who’s been through it but is now back playing.

“It’s a hard thing to deal with and any footballer knows this injury is the last one you want to pick up.

“But Pip’s a great guy and his reassurance has really helped.

“He knows my character.

“We both know I’ve got to me patient and I’ll take his advice.

“If I do end up needing it replacing, Pip’s shown that you can still come back and play again.”

The winners of tonight’s Essex Senior Cup match will host West Essex in the second round, on or before September 28.